FREE SHIPPING ON ALL ORDERS OVER $500

Body armor is part of your tactical defensive setup. It is protective gear that defends against many types of threats. Safe Life Defense is a premier manufacturer of body armor and we sell to law enforcement agencies as well as the general public.

Correction officers, first responders, military personnel, police officers, medics and civilians across the country depend on our armor.

The concept of a “bulletproof vest” refers to a ballistic vest, but it is not an accurate description. “Bullet resistant” is a better description, since no body armor is 100% bulletproof.

A lot of people have questions about body armor effectiveness. The National Institute of Justice (NIJ) is a federal agency that establishes a series of categories that rank body armor by ballistic protection level. These ratings help inform which levels of body armor protect against which threats.

What is the National Institute of Justice?
The NIJ is a branch of the U.S. Department of Justice. Its role is to research, develop and evaluate information on crime along with the tools and methods used to fight crime. Part of that includes research on body armor, guns, and ammunition.

Where body armor is concerned, the NIJ’s categories or ranking system allow law enforcement agencies and officers to choose the armor they need to stay protected. This body armor ranking is called the “NIJ Standard”. Anyone can review the information online and use it to make an informed decision on what kind of body armor to buy. An official NIJ certification is often most important when securing money for armor through grants. An NIJ rating can refer to meeting all the NIJ requirements without certification.

What are the 4 Body Armor Levels? 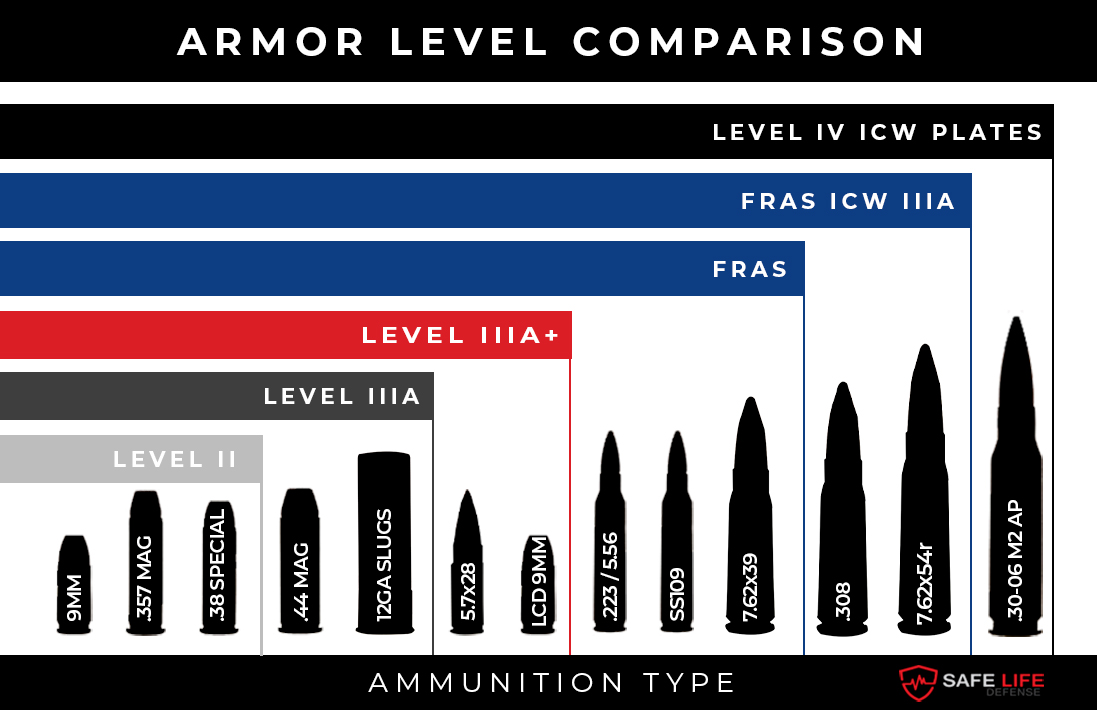 The four body armor levels and what they will become under the revised NIJ Standard are as follows:

Level II (will become HG1)
Level IIA will stop 9mm at 1,165 FPS and .40 S&W at 1,065 FPS. This means the rounds are fired from short barrel handguns. It offers no rifle protection. It is not as tough as Level II and is also soft and easy to conceal.

Safe Life Defense does not offer body armor in Level II or Level IIA. We pride ourselves on our soft body armor and FRAS® at high protection levels being comfortable enough to be worn as needed. We also believe you deserve more protection.

Level IIIA (will become HG2)
Level IIIA can protect against handgun threats such as 9mm Luger FMJ RN 124 grain and .44 MAG jacketed hollow point 240 grain. It can be heavier than Level IIA or II, but it is still very concealable. This is one of the most common protection levels you might find while shopping for body armor. Safe Life Defense enhanced this level of protection with our IIIA+ vest that stops everything under Level IIIA, PLUS FN 5.7 and Liberty Civil Defense. It also has added stab and strike protection. We also offer our ultra-thin HyperlineTM vest in Level IIIA.

Level III (will become RF1 and RF2)
In all armor levels, the back face deformation (BFD) rating is an important factor. The NIJ says the maximum BDF is 44 millimeters no matter the armor level. BDF is measured by shooting the armor as it rests against a block of clay. The dent in the clay is measured and this is the BFS (Back Face Signature). If the BDF is greater than 44 mm, it is not NIJ certified for this category. BFD checks are done on all kinds of body armor.

The RF2 level will cover other body armor products like Level III+ and the FRAS® system created by Safe Life Defense. The NIJ standard says this will stop 9mm at 1,470 feet per second (FPS) and .357 Magnum at 1,430 FPS. It will also stop handgun rounds with less power, but not centerfire rifle rounds. It is generally soft armor made of woven materials like Kevlar. This armor is fairly easy to conceal under regular clothes. As most gun attacks are made with 9mm and .40 S&W pistols, this is generally more than enough protection for the majority of people who need body armor.

Level IV (will become RF3)
Level IV armor changes to RF3 in the new category system, but remains the strongest body armor. According to the NIJ, it is rated to stop 30 caliber armor-piercing ammo and everything below that ballistically. Level IV body armor is recommended for situations where you may face green tip 5.56 or .223 ammo as well.

Safe Life Defense offers affordable Level IV protection in hard armor plates that are mosaic tile and ceramic (creating lightweight, multi-hit protection), but the cheapest thing you can get is still steel plates. Some steel plates are covered with anti-spalling material to reduce the risk of being injured by bullet fragments after the round impacts— but not all. We also offer armor carriers for these plates.

Safe Life Defense body armor starts at Level IIIA. Why? Because the lower-level armor simply does not offer the protection to meet today’s security and defense needs. The NIJ says Level IIIA is the minimum needed to stop .357 Sig, .44 Mag and smaller handgun rounds like the .357 Mag as fired from longer barreled guns. Level III+ will stop lead core 7.62×39 rounds and the .223/5.56 lead core rounds.

Depending on the level of protection needed, you can get a plate, soft body armor, FRAS®, and panels that are inserted into our armor carriers. Some of these items are ready to wear and others require that you place the armor where coverage is needed.

If you buy the plates or panels, then you will need to order a carrier. Our carriers are made to fit our panels and come in a variety of colors. Some have additional straps, pockets, and Velcro attachment points. Our high visibility (Hi-Vis) yellow is popular among EMS crews.

FRAS® (Flexible Rifle Armor System), a family of body armor that flexes while continuing to provide the protection you need, falls under RF2. Safe Life Defense offers FRAS® in several configurations that are rated to stop rifle rounds like .223, 5.56 and 7.62×39. Safe Life guarantees that FRAS® will be more comfortable than traditional plates. Many people say it is the most comfortable body armor on the market today.

FRAS® is not NIJ certified as of November 2020 because it is not a level the NIJ tests. However, it has been tested by a 3rd party NIJ Lab extensively and the testing results are readily available, so you can be confident it works.

Level IIIA+ vs. Level IIIA
An additional product that Safe Life Defense offers is our Level IIIA+ body armor. Level IIIA+ protects you from handgun and shotgun rounds PLUS FN 5.7 and Liberty Civil Defense rounds unlike the Level IIIA. The difference, expressed by that + mark, is spike protection and special threat resistance. In other words, it will protect you from sharply pointed knives, ice picks, and slashing attacks. The Level IIIA+ is not an official NIJ rating, but it is increasingly popular among people who use body armor. We put together a short video to better explain and illustrate the difference.

Is Level IIIA+ the same as Level IIIA? No, it is better. Level IIIA+ is exclusive to Safe Life Defense, but our IIIA+ is only certified as IIIA because the NIJ does not test for the other things our armor includes. The NIJ website says we are a certified IIIA maker, which refers to our IIIA+ model. From the perspective of the NIJ for testing purposes, there is no difference between IIIA and IIIA+ because they just don’t test to any standard other than IIIA. Our newest HyperlineTM Armor is Level IIIA.

BFD in Soft Armor
One of the things often overlooked in body armor is BFD, Back Face Deformation and BFS, the Back Face Signature Rating. This is the amount of energy transferred through the armor and into your body. The BFD refers to the bulge on the vest after impact and the BFS is the measure of indent into the testing clay. Another way of looking at it is blunt force trauma. In other words, the bullet does not enter your body, but the bullet’s force delivered on impact can carry through the armor and cause injury. Depending on the amount of energy transferred, you may feel nothing or up to enough force to break a bone.

The NIJ standard is a BFS of 44 millimeters or less. That means the armor deforms to 44 mm or less.

Does Hyperline™ have a good BFD rating? YES! The standard is under 44 mm, but Hyperline™ is well within that range with only in the mid-30s BFS rating.

Learn More About Our Body Armor

If you want to learn more about body armor, both hard and soft, visit us online. We offer extensive resources about our products and the industry to give you the information you need before purchasing. Then, when you are ready and know the threat level you may encounter, you can order the armor, carriers, and accessories that meet your needs.